The indwelling Atman which is distinctly shining within all the three states of experiences, namely the wakeful, the dreaming and the deep-sleep states, is the same which is pervading as the invisible thread embedded in every life, right from the Creator to the tiny ant, and remaining forever as the witness. Yet it is not knowable by any amount of external intelligence. Whoever has this wisdom and steadfast adherence to this knowledge, he alone, irrespective of his perceived stature in the world, be it lowly or holy, is the real preceptor. This is my determinate knowledge or conclusive wisdom.

jaagrat = In the wakeful-state (of gross body); swapna = in dreaming-state (where the gross body is absent) and; sushupti shu = also in the deep-sleep state (where ignorance prevails); sputa taraa = that which very clearly; sam vidu = lucidly knows everything; jrumbhatae = shines in all beings;

yaa = That which; brahma adi = from the Creator onwards; pipeelika anta = up to the ant (and such minute life-forms); thanu shu = in the living bodies; protaa = embedded and indwelling; jagat saakshinee = bearing the witness to all ;

sa yaeva aham = that is I am; na cha drusya vastvu iti = (yet) this is beyond our cognition; drutha prajnaapi asya = not knowable by external knowledge; asthi chaeth = It remains verily the same;

chandaalo asthu = may be a down trodden (outcaste); sa tu = in the same way; dwijo asthu = may be a twice born (who is learned); gurur iti = is the real preceptor; yaesha = that Great one who inculcates this concept; maneesha mama = my determinate knowledge or conclusive wisdom.

In this verse, the first line is about the Jeevaatman. It is about us. To understand the Self, the experiences of the Self are the most appropriate areas of study.

In this verse, when analyzing the Jeevaatman, the human embodiment is viewed in terms of three bodies and the three experiences that these bodies are variably subjected to.

The second avasta or experience is the swapna or dreaming-state. In this state, the gross body is absent and the external material world ceases to exist. Yet the subtle body, by using the imprint of memories from the waking-state as the food, creates the subtle world and endures its experiences as dreams.

The third avasta or experience is the sushupti or deep-sleep. In this state, both gross and subtle bodies are covered under the blanket of ignorance; they cease to exist and only the ‘I’ consciousness remains as un-manifest.

Generally knowledge gained through experience is different from the knowledge gained through the analysis of the experience which is deeper and profound. For example, as we experience the Sunrise and Sunset every day, we gain the knowledge that the Sun rises in the East and sets in the West. This is relatively correct but not absolutely. As we analyze further, we learn that the Sun never raises nor sets; only the vector of earth’s rotation creates the notion of directions and the perception of rising and setting of the Sun. The former knowledge is due to kaariya dhristi while the latter is due to the kaarana dhristi; indeed there is more insightful understanding when we analyze our experiences.

What is the purpose of analyzing the three experiences of the Self? It is to understand that which is real and common across these three apparently different existences. The first lesson from this analysis is that what we seem to own or experience in one state does not exist in the other states. The sumptuous dinner that we had in our dreams does not fulfill our hungry stomachs in the waking-state. In the same way, the material possession of the waking-state does not help in the dream-state. In the deep sleep state, the only possession is ignorance. This means, the body, mind and the world of experience do not remain permanent across these three states.

So what is that, which remain unchanged in all these three states of consciousness?

Secondly, the ‘I’ remains in the form of knowledge only; thirdly, the ‘I’ is unchanged and eternally existing for all three states of Self-experiences. As the human life is nothing but the temporal aggregate of these three experiences, it follows that the ‘I’ is unchanging, ever present witness during the entire journey of human-life. Only those who see this are the Seers; only they are able to declare ‘I am the infinite-knowledge’ or ‘I am eternal’.
These are the key facts from the first line of the verse, as the result of analyzing the Jeevaatman.

In the second line, Sankara asserts that the same ‘I’ consciousness in the Self is no different from the ‘I’ that is the indwelling knowledge in every life form, starting from the mighty Brahmadeva (the god of creation) to the minute ant. While the analysis of Universal-Self is further done in the next verse, what is determined here is that the ‘I’, indwelling in the Self as shown in the first line, is the same as the ‘I’, indwelling in very other life forms in the world.

This is denoted by the ‘maha-vaakyam’ in the third line. ‘sa eva aham’ meaning ‘ that am I’.

The Jeevaatman enshrined in individual embodiment and the all pervading Paramaatman embedded in the universal embodiments are one and the same. The Paramaatman which is considered as the indwelling energy in all life forms is also called Ishvara. Therefore, by the declaration ‘sa eva aham’, Adi Sankara denotes the identification and the unification of Jeevaatman with Ishvara.
A doubt may arise!

If the eternal knowledge is within me as the ‘Self’, why is not possible to know this? Why is it difficult to comprehend? Adi Sankara explains this in the rest of the words of the third line of the verse.

The Self is non-cognizant. It is not knowable. If something is known, then the knower is different from the known. Is it not? As the Self is proven to be in the form of infinite-knowledge, there can be no external knowledge that can know the Self. That is why it is said that the Self, or the Atman is not knowable.

In the last line of the verse, Adi Sankara asserts his determinate knowledge or conclusive wisdom, as the response to the question of the Stranger. That is, anyone who has the wisdom to understand and hold steadfast contemplation on the above described knowledge, irrespective of his status in the world, be it a lowly outcast or holy brahmin, he alone is the preceptor and guru. This is his Manisha.
Thus, Adi Sankara has established in the first verse, the analysis of Jeevaatman to establish its identification with the Paramaatman or Ishvaran. In the second verse, he will reconfirm this assertion by analyzing the Ishvaran as the Universal-Self. 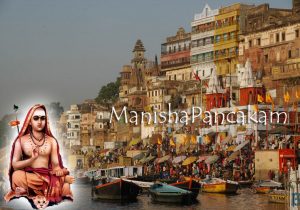 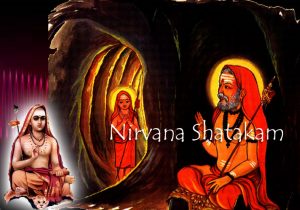