Meaning
By realizing, only a few droplets of the ocean of the absolute-bliss, Indra and other gods are enjoying immense pleasures in their worlds; In this world too, so are the Seers of clear intellect who are immersed in much greater bliss only within their serenely focused mind. Through unwavering commitment, when the Seer ultimately and completely merges in the Self, the ocean of Absolute-Bliss, he is no more the knower of Brahmam, but verily the Brahmam. Whoever understands and holds steadfast knowledge on this everlasting, perfect and absolute-bliss, he alone, irrespective of his perceived stature in the world be it lowly or holy is the real preceptor, having the feet worthy of worship by Indra. This is my determinate knowledge or conclusive wisdom.

Second Line:
ya = Which; chchiththae na itharaam = only through the mind (without any other efforts); prashaanthakalanae = faultless and pure; labdhvaa = experiences; munir = For the Seers (in this world); nirvrithah = uncompromising ( experience exist);

Third Line:
yasmin = whoever (is); nithya = forever; sukha ambudhau = (in this) ocean of bliss; galitha dheer = (remain) completely mixed; brahmaiva = is Brahmam; na brahmavidh = (thereafter) not the knower of Brahmam;

Fourth Line:
yah kaschit = whoever is such a person; sa = if so as said (in the above lines); suraendhra vandhitha pado = (such person) has the feet worthy of worship by Indra the head of celestial gods; noonam = Strong assertion; maneesha mama = my determinate knowledge or conclusive wisdom.

The first two verses indicate that the Atman is eternal as the ultimate noumenal (Sat). The next two verses show that the Atman is infinite-knowledge (Chit). The fourth verse, indicated the Absolute-Bliss (Ananda) nature of Atman. In this final verse, this is further elaborated and also in response to the second question of the Stranger, where he indicated this very nature of the Atman.

The Atman is the ocean of Absolute-Bliss (Ananda).

Here, Sankara uses the word ‘saukyam’ to denote the nature of Atman. In Sanskrit the word ‘saukyam’ refers to the state when one is absolutely and completely happy – in body, mind, intellect. ‘suakasvarupam saukaum’ – implies that happiness is our nature. As we are forgetful of our nature due to ignorance, we long for it.

Not knowing, what is the true happiness or our true nature, we wander hither and thither in life, searching for the non-terminating joy in our relationships, possessions, actions and all only in vain.

Seeking happiness in such external objects is known as ‘vishaya aananda’ in the Upanishads. Ordinarily, we only associate with ‘vishaya aananda’ and think happiness exists in the objects of desire. Money, ornaments, real estate, position, fame and such material possessions are believed to provide the happiness we seek, but are eventually proven to fail. We eventually realize that happiness thus achieved is impermanent and turns out to be distress and sorrow in the end.

The Vedanta offers some help to understand this.

Then we change our view that the happiness is not in the desire at all, but only in its absence. Every action when done without any desire of its benefits, must give true happiness. This is what Sri Bhagavad Geetha describes as ‘tyaaga aananda’ or the joy of detachment. By dispassionate service and through unconditional sacrifices, a more refined joy is achieved. This is better and reflects an evolved state, yet the search for the absolute-bliss continues.

A different, but a nobler desire roots in our heart that seeks the absolute and complete happiness. We begin to understand that the Self is the absolute-bliss and it is shielded only by our ignorance. We learn that only with clear intellect and serene and focused mind devoid of undue desires, the underlying ocean of bliss-absolute can be seen.

By realizing only a few drops of that bliss, the gods in their worlds have immense pleasures. Similarly by contemplating on the Self, the Seers on the earth acquire far more happiness within their mind. That is the true and eternal happiness, which the Vedanta calls ‘gyaana aananda’.
Only those, who have immersed in the ‘gyaana aananda’ are able to declare such as ‘there is none other than the Self, there is none to desire none to deny, I am the Self, I am the Brahmam,’ etc. They are the Jeevanmukthas who are truly the happiest souls wandering in the world. Such a Seer continues in this supreme contemplation; ultimately in efflorescence, he becomes one with that ocean of absolute-bliss. He is no more a knower of Brahmam but Brahmam itself.

Merging into this eternal Sat-Chit-Ananda is the only destination and destiny for all lives. This is natural. This is the eternal law!
Out of compassion, the highly profound and ordinarily incomprehensible yet the simplest of the simple truth of Vedanta has been beautifully presented for our understanding so as to raise with equanimity that is free of pride and vain ego, to raise the world that is free of discriminations and hatred, to raise the Self to the Universal-Self, by the greatest Jagadguru Adi Sankara, in his magnum opus – Manisha Panchakam. 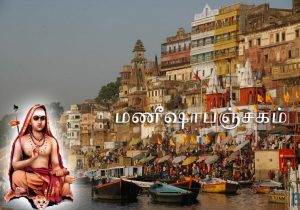